Augmented reality (AR) is nothing new, at least not at the pell-mell speed of innovation in the 21st Century.

For those not in the know, augmented reality is using a smart device, like an iPhone or a tablet, to augment what you’re seeing with the naked eye... in the real world.

A simple example is the hugely successful game Pokemon Go, available for mobile devices. The game allows you to hunt for, and catch, Pokemon that could appear wherever you are in the world. It's possible to play whilst sat at your desk or lying on a beach in Marbella.

At the other end of the spectrum is something like the augmented reality feature on Bing Maps for Windows Phone. The app provides you with an augmented view of your environment, showing you what or where everything is in relation to where you are standing. 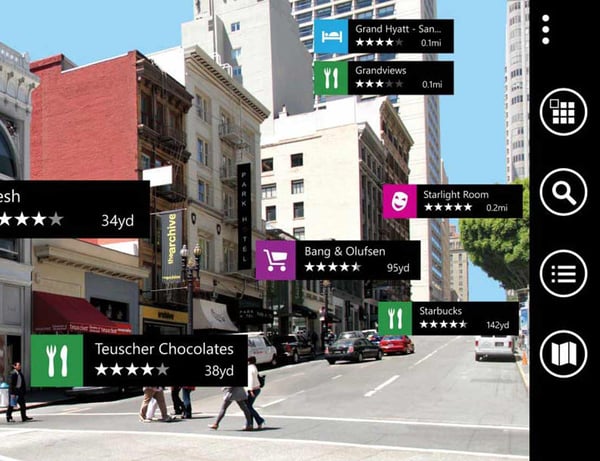 Needless to say, the level of technological complexity that goes into these products is staggering but a great deal of that coding is because the device needs to be able to not only know where it is in the world but what it’s ‘seeing’ as well.

Where this technology can help businesses is by merging offline and online media. Smartphones are everywhere and so creating a banner, hoarding or stand that can be interacted with rather than just observed is a far more powerful experience for our customers.

Imagine the hype and upsell created by a stand in a toy shop that children can actually interact with? Or the excitement for passengers who can watch a clip or play a game inspired by a new movie whilst waiting for a bus.

It can even be applied to building signage which opens up the opportunity to create engagement inside and outside of your offices. The possibilities are huge.

It bridges the gap between the analogue and the digital, creates engagement and conversation. Word of mouth is a powerful driver.

Moreover, an augmented poster is highly sharable content if it has been well executed. This means your poster, at a bus stop in Margate can potentially be seen by anyone in the world giving your brand unprecedented exposure.

Some of the most iconic brands in the world including our old friends, Volkswagen, have used augmented reality to enhance their print media and social medi campaigns alike. Vespa augmented reality meanwhile has proved a huge success.

Back in 2012, Volkswagen used Augmented Reality to in magazine and large print ads to engage and excite an audience who weren’t even looking for a new car.

This demonstrates the point that a great idea designed well and produced using modern thinking can reach a far greater audience. Thanks to the the AR app it can also be done in a far more measurable way.

This is where Augmented Reality can benefit businesses beyond the excitement and engagement such a novelty brings as it’s entirely measureable.

App downloads can be tracked, use can be analysed and extrapolations made based on any increase in website traffic, enquiries or orders/purchases. The AR experience can be monitored.

There is, of course, the urge to augment every new billboard, stand or magazine ad in this way but less is definitely more. Especially as you want to make sure the added investment has paid for itself.

However, Augmented Reality isn’t for everyone or for the impatient. The good campaigns are the ones where thought, time and effort have gone into creating something amazing and memorable.

Services like Blippar and Layar give any business the tools to combine print and digital marketing but without a plan it will fall flat.

Figure out your objectives, design your augmented reality page and we’ll take care of the rest.

Want to start your own print project? Request A Quote or Contact Us.