There are several reasons why someone might consider printing onto Dibond.

A range of finishing options, strong weathering qualities and ease of installation convince many to create signage in particular this way.

Yet in an era where sustainability has never carried more significance, the fact this material is 100% recyclable means it attracts conscientious designers and printers the world over.

A substrate sandwich, it consists of two aluminium sheets – typically 0.3mm thick - flanking a solid polyethylene core – itself around 5-10mm.

The amalgamation was thought up by a combination of a chemist and an entrepreneur who stumbled on a means of creating thin rolls of aluminium strips this way back in 19th century Germany.

By 1964 aluminium composites were patented by a company called 3A Composites, this for architectural applications. The same technology gave rise to their Dibond patent in 1992 – intended for signage. 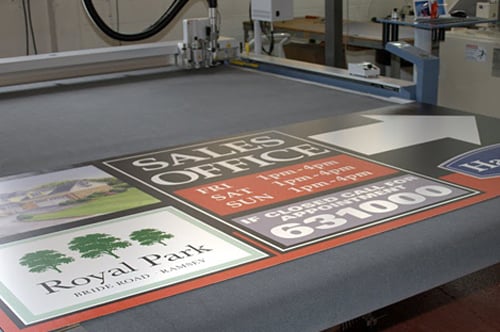 That Dibond would be utilised for sign making is obvious.

A flat, aluminium surface is always going to lend itself to direct, digital printing and can be either straight cut or manipulated into 3D shapes.

Indeed, ACM can be curved and rounded, making it one of the most versatile options on the market. Dibond shaping has long been a service offered by professional print providers like ourselves.

Whatever your requirement, it can ordinarily be achieved in next to no time, for Dibond is synonymous with quick turnarounds.

As well being lightweight and rigid, the material can be drilled, nailed, screwed or riveted to almost any surface imaginable. This makes it easy to install, no matter the environment.

That much sought-after metallic glean meanwhile can be realised courtesy of a host of different finishes, none of which rust like the real thing. A polyester lacquered surface sees to that.

Unlike some materials, dibond is built to last. It is weather, water and rust resistant and even boasts a Class O rating when panels are framed. This underlines its resilience and the fact it can withstand temperatures as high as 80 degrees Celsius.

It’s for these reasons it’s become the go-to for exterior signage, along with construction hoardings and storefronts.

Not that it can’t reimagine an interior space too…

Office décor is often based on Dibond design and there’s a fair chance you’ve ordered from a counter or bar made of this very material. Yes, really.

Despite all manner of positives this is one substrate that won’t break the bank. While Dibond isn’t the cheapest material to print onto, given the aforementioned benefits, it can be considered a cost-effective one. 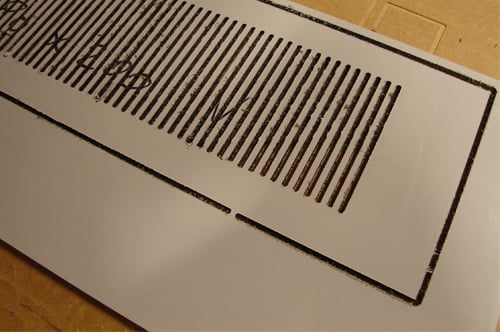 Evidently, the advantages of working with Dibond speak for themselves, hence its growing popularity. In 2021 however impact is measured beyond wow factor and footfall, with carbon footprint uppermost in minds.

This is where Dibond truly comes into its own.

In short, the material is completely recyclable, this due to a technical procedure which both separates and processes the aluminium and polyethylene at its centre.

The continuous and automated division of the pair, on an industrial scale, takes pace in recycling plants that have what’s known as Plastic Dry Separation Systems.

Here’s a brief summary of how these work…

Firstly, the composite materials are crushed into mixed granules using a process known as Mechanical Crushing. Simply put, a plastic crusher either shreds or crushes the materials into smaller pieces.

From here Powder Milling occurs in a bid to downsize even further. A crushing mill results in the composite material turning to aluminium and plastic mixture powder respectively. Interestingly, a number of these mills come complete with dust extracting systems included.

A vibrating screen (Screening) is then used as a sieve before Electrostatic Separation itself takes place. A separator system is used for this, one built specifically for the divorce of nonferrous materials from mixed equivalents.

The entire process is one without emissions, with neither chemicals nor water used. In fact, there is no excess waste whatsoever.

Dibond is intended to be easily separated and recycled, something which broadens its appeal.

The fact anything printed onto it is long-lasting also means it’s better for the environment. These are signs designed with permanency in mind, as opposed to those erected for one-off events then immediately discarded. The likes of Correx are better suited for the short-term.

Granted, there are other materials used for sign making that are recyclable – namely acrylic, Foamex and Tyvek - but Dibond can stake a claim to be THE standout, eco-friendly option.

Printing signs made of Dibond will help you leave a big impression on customers and a minimal one on the environment. That surely represents a win-win scenario.

Want to print onto Dibond? Request A Quote or Contact Us.