Make A Statement With Outdoor Design

Make A Statement With Outdoor Design

Outdoor design is an art form unto itself.

Because of the sheer size of the canvas you have to work with, designs that would be a non-starter in any other form of print media are entirely feasible on billboards and sidings.

It’s also possible to go beyond the purely visual and introduce tactile and 3D elements to really make your design come to life.

In recent years exterior design has moved further and further away from (what are essentially) the large format version of magazine ads. The thinking behind it was continual reinforcement of message. As with all gimmicks, it worked for a while. Then stopped.

Since then outdoor design has become akin to a marketing stunt in their own right. Dramatic, eye catching, urban or even interactive. The gloves are well and truly off.

We’ve talked about augmented reality before and used Volkswagen’s Beetle outdoor campaign but it is a perfect example of how a traditional medium such as outdoor marketing can engage an audience in a new and exciting way.

Below are some great examples of businesses who have taken full advantage of the fact that their advert is being presented in a three-dimensional space.

Albeit a classic, this old iPod ad is literally bursting with variety. So much so it is erupting off the board.

What really makes this design work is that it draws your eye down, through the album art until you reach a simple representation of the iPod, Apple logo and the names of the products they are promoting.

The album art in this example is utterly irrelevant to Apple because the audience will walk away knowing that whatever music they are into, whoever their favourite artists is, Apple and iTunes will deliver it. 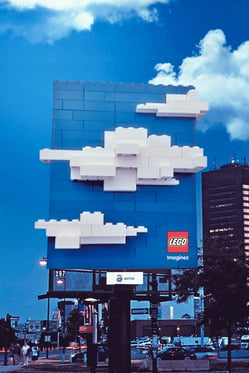 Favourite amongst children, and nemesis of barefooted parents, around the globe:

Lego does an incredible job of using the product itself – alebit an upscale version – to elegantly communicate the heart of everything Lego is and does is imagination.

The brick clouds burst from the signage, making full use of the environment whilst brilliantly communicating the unspoken whimsy of a thought bubble – the creator’s playground.

Anyone familiar with Christopher Nolan’s Dark Knight trilogy of movies will recognise the distinctive Bat symol in this billboard.

The charred silhouette of one of the most recognised symbols in the world is advertising the third movie in the series: The Dark Knight Rises.

This ‘smoking ruin’ is actually a follow on from the advertising used to promote the previous movie; The Dark Knight. 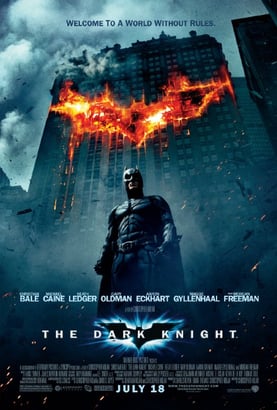 So not only is the poster advertising the sequel, the poster itself is a sequel.
Die hard fans of the movies will make the connection and appreciate the reference. Those who saw the trailers for the third movie will understand it as a reference to the plot.

Either way it represents a fantastic use of outdoor space to promote a movie beyond the usual artwork, date of release and call to action.

You’ll notice that all three of these designs have no call to action what so ever.

They don’t ask you to do anything, buy anything or see anything. They make a statement and rely on the quality of their brand and product to do the talking for them.

This is where the biggest shift in design lies.

As we’ve said time and again, brand is everything. Much like the Bat symbol and the cowl epitomises the Dark Knight, your brand defines you.

Combined with a canvas as vast as the great outdoors it allows you to draw out all the different elements of your business persona and the product or service you’re selling in an incredibly individual way.

Evans Graphics is uniquely placed to work with your or your design team to create amazing large format designs for outdoor use.